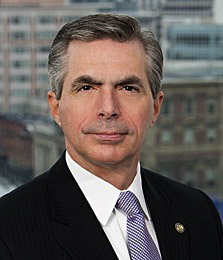 He was named a Top Lawyer in DC for Cybersecurity by Washingtonian Magazine for 2015.

Jamie has had a distinguished career in the public and private sector. A surface warfare officer, he has over 30 years of experience in the United States Navy and Navy Reserve, rising to the rank of Rear Admiral and serving as Deputy Commander, Navy Expeditionary Combat Command and Director of Naval Education and Training in the Pentagon. Among other personal awards, he has received four Legion of Merit medals.

In addition to his military service, Jamie served as the Chief of the Public Safety and Homeland Security Bureau of the Federal Communications Commission where he executed major cybersecurity initiatives. As Chief of the Bureau, Jamie also led major rulemakings and projects in public safety broadband, emergency alerting and Next Generation 9-1-1, working closely with industry and government stakeholders. He has also testified before Congress and is a noted speaker on cybersecurity.

For nearly 20 years, Jamie worked as an attorney in private practice. He represented cities, counties, school districts, law enforcement agencies and development authorities in the board room and in state and federal court advising on a range of topics including constitutional law, governmental liability, personnel and employment law, education and school law, policy development, legislation, procurement, and ethics.

Prior to joining Venable, Jamie served as Senior Vice President for National Security Policy at the Potomac Institute for Policy Studies, a premier not-for-profit science and technology policy research institution in the Washington, DC area. He remains a Senior Fellow of Potomac Institute.