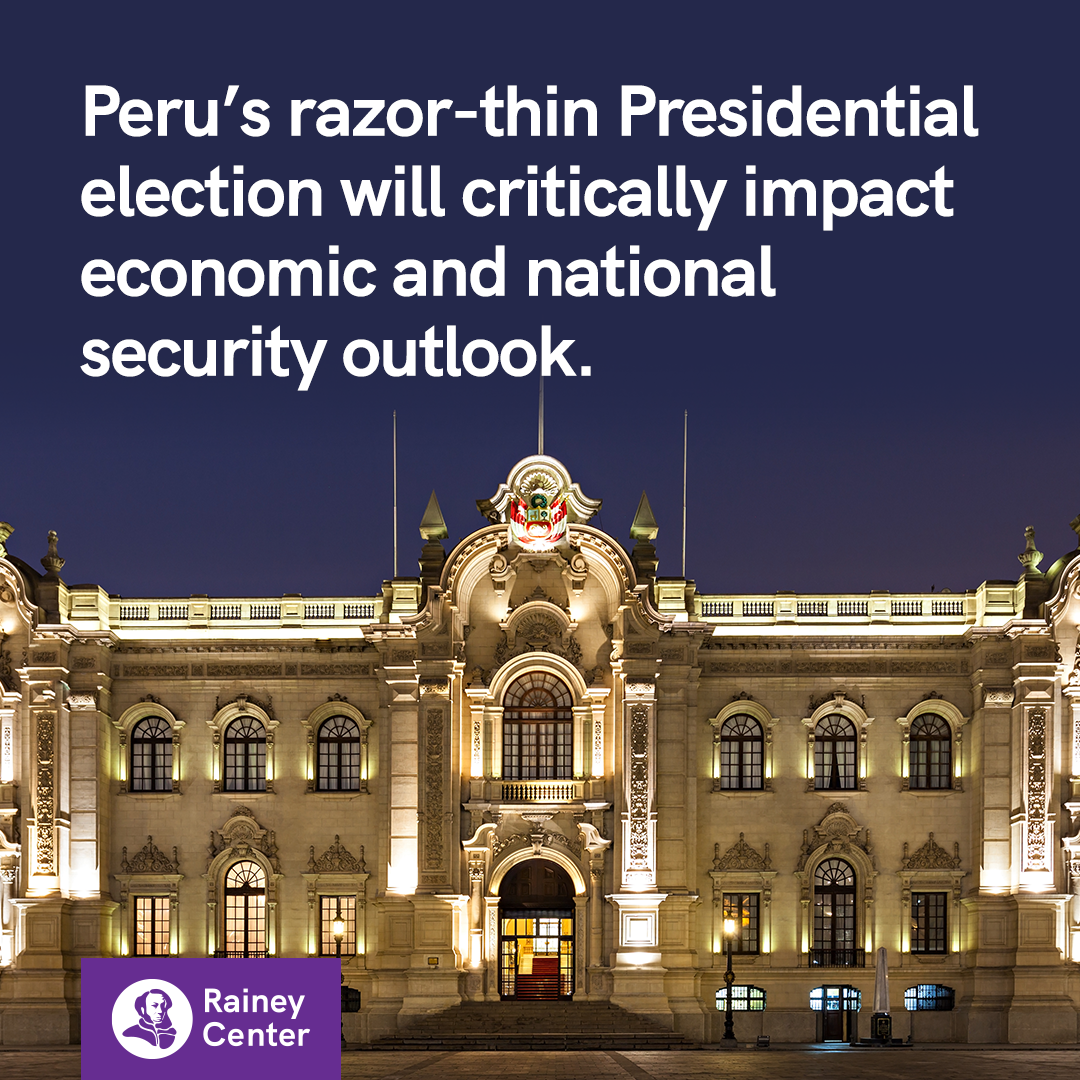 As originally published June 6th, 2021 in The Washington Examiner‍‍

This Sunday, voters in Peru go to the polls to elect a new president. The choice they face is between Keiko Fujimori, a center-right candidate – who is the daughter of former Peruvian President Alberto Fujimori, who is in prison for crimes against humanity, corruption, and mismanagement of government funds – that is out on bail pending a case regarding corruption charges, versus Pedro Castillo, a schoolteacher and union leader who has openly expressed a fondness for Vladimir Lenin and openly associates with members of MOVADEF (Movement for Amnesty and Fundamental Rights), which is the political wing of Peruvian terrorist group, the Shining Path. To say neither candidate is perfect is fundamentally an understatement. Speaking as a Peruvian-American with many family members still living in Peru, however, it is undoubtedly in the United States’ best interests that Peruvian voters elect Keiko Fujimori.

Fujimori studied in the United States, earning her undergraduate degree at Boston University and an MBA at Columbia University. While at Columbia, Fujimori met and married an American, Mark Villanella, with whom she has two children. It stands to reason given her tertiary and postgraduate studies in the United States along with her family ties through marriage that Fujimori’s links will translate into policymaking that welcomes increased bilateral cooperation between Peru and the United States.

Fujimori, like her father before her, is in favor of sensible free market policies. Given the manner in which the COVID-19 pandemic has severely impacted the Peruvian people – with the government recently admitting that the death toll from the illness is more than double what was previously thought and now stands at 180,764 – and with the Peruvian economy suffering in this moment, Fujimori’s economic views are much needed.

As for tackling terrorism, this is an issue Peru has sadly been dealing with for over 30 years – consuming much of Fujimori Sr.’s presidency – and which has recently reared its ugly head once again when 16 people were killed towards the end of May, including two children, in the impoverished VRAEM (Valle de los Rios Apurimac, Ene y Mantaro) region in an attack that Peru’s Armed Forces say was carried out by the Shining Path. Fujimori has made it clear that she plans to eliminate the remnants of the Shining Path if elected president.

Mr. Castillo on the other hand has a very different and much darker vision for Peru. He has openly threatened to shutter the country’s constitutional court – which he took back when he realized this would hurt him at the polls – and wants to eliminate freedom of the press over his perception that many media outlets are far too cozy with corporate interests. In addition, Castillo wants to get rid of private pensions and burden the mining sector – one of the few sectors of the Peruvian economy that is consistently profitable and essential to the country’s economic development – with increased regulation and taxation to the point that would disincentivize foreign investment in this critical sector which already produces important tax revenues for the country. Since Peru is the world's second largest copper producer and has a free trade agreement with the United States, what happens in Peru's presidential election will undoubtedly impact the U.S. economy.

Ultimately, Mr. Castillo is banking on understandable disgust at Fujimori’s father’s crimes against humanity and corruption and his campaign has done everything it can to label Fujimori Sr. as his daughter’s unofficial running mate. In addition, Castillo is looking to make this election a referendum on the past 30 years of economic development in Peru, arguing that wealth inequality has skyrocketed and that discrimination against indigenous peoples has closed off pathways to success for most Peruvians. While economic statistics would clearly show increased prosperity for all Peruvians over the past 30 years, including substantial middle class growth, the narrative being pushed by Mr. Castillo understandably rings true to many across Peru.

If Fujimori wins she must work to address the social inequities that Castillo has highlighted in a manner that is in line with her pro-market policy proposals so as to ensure that all Peruvians benefit from the country’s economic success. To further gain Peruvians’ trust she must also not pardon her father, unreservedly apologize for her own ongoing corruption case, and ensure that she represents all Peruvians, including but also beyond Lima. With a one to two point difference separating Fujimori and Castillo, it’s anyone’s guess who will be Peru’s next president.

J.P. Carroll is a senior fellow for national security and inclusive governance at the Joseph Rainey Center for Public Policy. He tweets @JPCarrollDC1