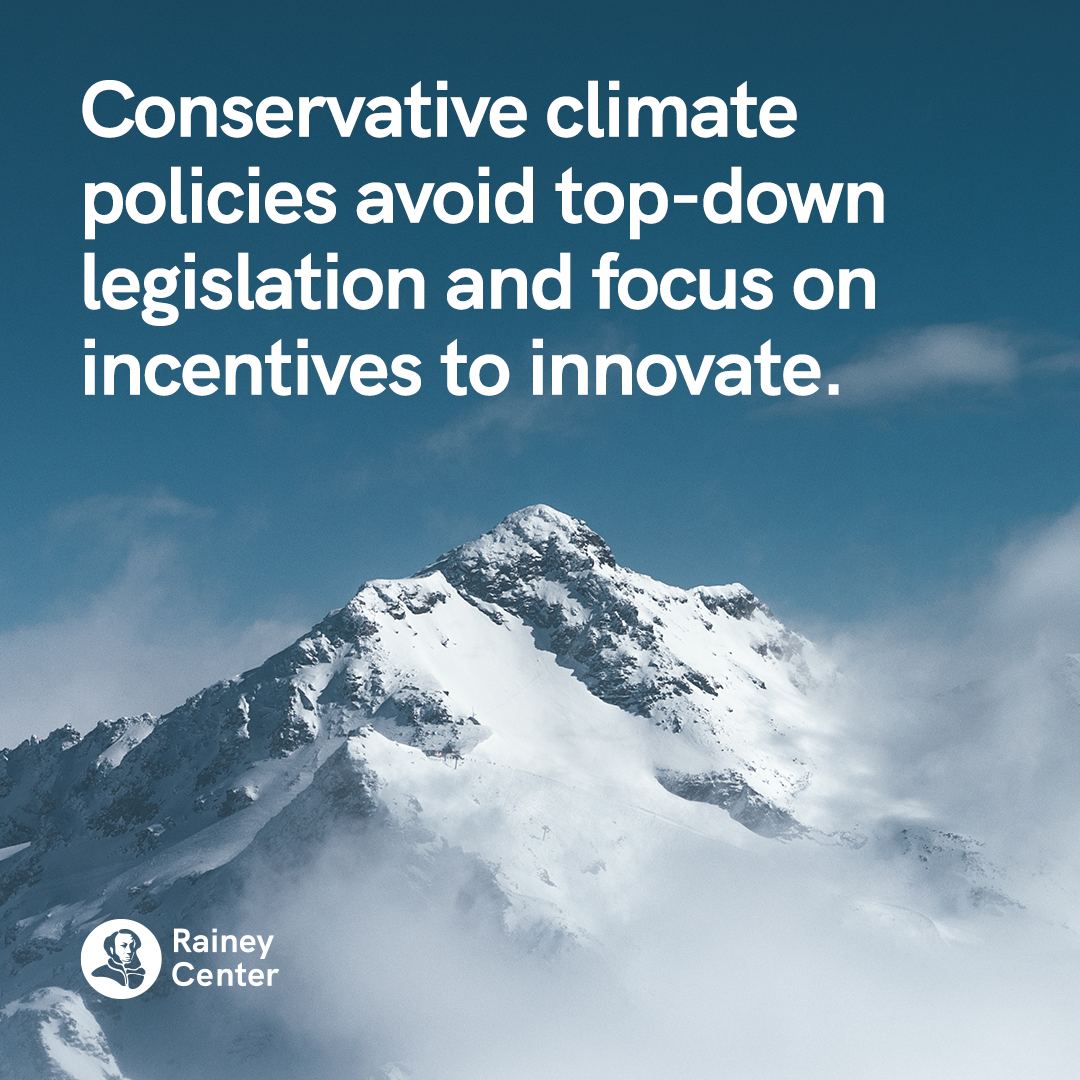 As published on June 8th, 2021 in Science and Technology

As is often the case with democracy, the competition of ideas can result in policy synergies after negotiation and compromise, often resulting in a better approach than any group envisioned alone.  But Republican climate leaders have not explained their approach clearly or passionately enough to the general public. Vestiges of climate skepticism in the party continue to create difficulties for conservative leaders seeking to communicate with the party’s grassroots regarding prevailing scientific consensus about climate change. Fortunately, skeptical voices are increasingly less influential today. A growing number of Republican members of Congress are proposing and energetically promoting legislation.

Democratic climate leaders routinely underappreciate the American electorate’s unwillingness to make short-term sacrifices—such as paying higher gasoline taxes and rising utility bills—for uncertain long-term benefits. French President Emmanuel Macron learned this the hard way when his increase of a fuel tax led to the Yellow Vest protests in late 2018, a movement that is still prominent in France. Republicans, on the other hand, have paid close attention to these increases in marginal prices, which can quickly add up to the point where working-class American wages are insufficient for costs of living. This awareness informs the Republican approach to climate change, which is built on the search for policies that can deliver short-term economic gains for citizens while simultaneously improving environmental quality.  Today disparate economic and environmental impacts of climate change on working-class and poor families is a key consideration on the left. The conservative impulse to consider the real-world economics of enacting any climate policy should therefore be a welcome addition to a bi-partisan climate conversation.

Several Republicans currently promote various components of what can be considered the foundations of a GOP climate policy. Reflecting initiatives Republicans have previously supported, the foundation of their strategy is broadly based on a philosophy of market environmentalism with public-private partnerships at its core. More specifically, there are four pillars of a conservative climate framework that appeal to Republican leaders and resonate with conservative philosophical approaches to governance. They include 1) technology-agnostic incentives, 2) economic and environmental stewardship, 3) public-private partnerships for energy innovation and U.S. global leadership, and 4) regulatory reform and transparency.

Republicans tend to favor market-based incentives over centralized bureaucratic management. For this philosophical reason, conservatives prefer incentives that focus on environmental outcomes rather than preferences for specific sources of energy or types of technology. There is a practical reason for technology-agnostic approaches, too: policymakers cannot predict which combination of technologies, inputs, and business models will generate the next clean technology breakthrough. Numerous studies demonstrate that to reach net-zero emissions, a diverse set of technologies is necessary, including the 24/7, “always on” electricity provided by nuclear energy, the integration of carbon capture technologies with fossil-fuel-burning plants, and intermittent, renewable energy sources such as wind or solar. Focusing on the broad goal of net-zero emissions and remaining agnostic on the specifics will unleashes creativity and ingenuity across the economy.

These efforts require basic standardization to enable the market to work, such as how to measure and catalog net emissions, but  Republicans prefer to design these regulations to be as hands-off as possible. In a global context, technological flexibility enables different countries with varying geographies, resource endowments, and technical know-how to contribute in their own ways. Although Republicans are willing to consider providing support to navigate the unique market realities for certain emerging technologies on case-by-case basis, such as carbon capture[DS2] , it is not their preferred approach.

Republicans embrace more enthusiastically than many progressives the pragmatic view that nuclear power, natural solutions such as planting forests, and fossil fuels like natural gas will play an important role in reducing carbon emissions as America continues to innovate toward a net-zero energy sector. In terms of policy, being agnostic on the pathway to lower emissions includes incentives like the Section 45Q tax credit—which was supported by Republicans such as Reps. David Schweikert (Arizona) and Brad Wenstrup (Ohio). This measure provides up to $50 per metric ton of carbon captured for geologic storage.

Conservatives often oppose large government projects because they have concerns about creating short-term economic hardship through upsetting the delicate balance of existing economic interdependencies. Environmentalists, in turn, have paid too little attention to broader, real-world economic impacts of their proposals. If new environmental proposals undermine American business and livelihoods of workers such that community members are no longer able to make ends meet, that is a human tragedy which will only lead to greater political resistance to all climate change policies. Environmental initiatives designed to increase the number of Americans who can make a good living while being good stewards, however, will create a constituency to fiercely protect the environment.

The Great American Outdoors Act of 2020 that provided billions in funding to address deferred maintenance for America’s National Parks is one recent policy that kept both economic and environmental stewardship in mind. This investment in National Park conservation was touted by Republicans and Democrats alike as one that preserved America’s most beautiful natural wonders and the tourist economies these parks support, largely in rural America. The Growing Climate Solutions Act, co-sponsored by 10 House Republicans, is another example. The act provides access to voluntary carbon-credit markets for farmers and ranchers who engage in climate-friendly practices. The same inspiration can be seen in conservative support for policies, such as Rep. Gus Bilirakis’s (Florida) 2019 SHELTER Act to provide tax credits for real property improvements that enhance resilience against climate-exacerbated extreme weather events like hurricanes and wildfires. These policies encourage economic activity while promoting conservation, carbon emissions reductions, and efforts to adapt to extreme weather conditions.

The U.S. has long engaged in some form of industrial policy with huge economies of scale as necessary for the national interest, including past support of the fossil fuel industry and electric utilities. Republican leaders ambivalent about the government’s role in energy markets must accept this global political reality. Those who already do, such as Sen. Lisa Murkowski (Alaska), took important steps to provide the U.S. a competitive clean technology edge when their leadership passed the Energy Act of 2020.

The United States can and should remain a global leader in clean energy technologies. There is fierce international competition on this front, especially with China. In addition to the obvious underlying national security concerns, if the U.S. government fails to treat clean technology as a competition between different economic and political models, it will cede too much to the China’s tightly controlled economic system. In turn, this will allow China another platform to globally export its authoritarian mode of governance.

Unlike many other nations, including some western democracies, the U.S.  government does not directly own and operate much of the energy industry. The federal government sets ground rules—such as prohibiting price-gouging in jurisdictions where one company is the only energy provider, offering incentives for innovation, sharing federally-funded research and development broadly with market actors, and providing credits for servicing difficult-to-reach members of the local community. But it does not operate the private sector companies that implement industry standards. This is a critical distinction and is one reason our nation is continually at the forefront of innovating new energy technologies.

Without government backing of early-stage research, private energy innovators are wary of taking on risks and often cannot obtain the investor confidence needed to commercialize their technology. Once the new technologies are proven, private industry is better equipped to fine-tune the technologies, increase their economic viability, and scale their use across society. Decades of public-private partnership in research and development for hydraulic fracturing technologies led to the shale gas revolution in the hydrocarbon industry. Broad U.S. industry implementation of hydraulic fracturing helped transform the U.S. into a net-energy exporter while significantly reducing overall U.S. carbon emissions. This division of labor between government and industry should continue to guide the American approach to global leadership on energy innovation as we race with China and other nations to tap into emerging markets and deploy new clean energy technology.

Accelerating technological innovation through such public-private partnerships can also move the world toward lower emissions faster and in more cost-effective ways than most top-down, directed initiatives.  In addition, in a globalized energy market, the dollars spent reducing emissions that are hard to abate at home can sometimes be more effectively utilized by deploying American innovations at scale around the world. Given that every CO2 molecule emitted on the planet has the same global warming potential, commercializing and scaling new energy technologies quickly into countries with older, emissions-heavy energy sectors can have a greater overall impact than driving the United States domestically to zero net emissions as fast as possible.

Cutting red tape and improving government transparency can be environmentally friendly. The mindset for regulators and regulation-slashers alike should be openness to re-examining all regulations and asking the following questions:

1.     Why was this regulation created? What problem was it trying to solve?

3.     Does it still make sense?  Can we do it more efficiently or eliminate it entirely?

In light of such questions, reforming the National Environmental Policy Act (NEPA  is essential for the rapid deployment of clean infrastructure and technology needed to address climate change. NEPA is outdated, artificially delays low-carbon energy infrastructure projects and remains so despite the Republican Trump administration’s efforts to streamline the process. NEPA notoriously held up a major off-shore wind project for years. NEPA compliance adds both millions of dollars and years to the permitting process for zero-carbon nuclear power plants. As the nation seeks to rebuild following the COVID-19 pandemic, streamlining NEPA will allow for faster deployment of shovel-ready clean technology infrastructure, creating good jobs and a healthier environment in the process.

The recently introduced Solar Access Act by California state Senator Scott Wiener, a Democrat, is a good example of additional red-tape slashing efforts conservatives should favor. The Act speeds approval of permits for residential solar power and solar storage installations in California by, among other things, allowing remote inspections and approvals of residential solar equipment.

Phasing out tax credits and regulations that protect mature energy technologies to the detriment of new ones fits into this type of effort, too, and has support across the political spectrum. This approach represents a key component of the Crapo-Whitehouse Energy Innovation Tax Credit legislation, which phases out its tax incentives for energy technologies as they mature and gain market entry.

Building on these four pillars of policy making, a conservative approach to climate policy is taking shape in Congress.  In today’s dramatically partisan policy environment, the principles of technology-neutral incentives, economic and environmental stewardship, enhancing U.S. global competitiveness through public-private partnerships, and increased regulatory transparency and efficiency should appeal to Americans across the political spectrum. With little time to waste in our efforts to mitigate global climate change, even small steps forward in each of these categories will add up to play a critical role in creating a better economic and environmental future.